The Hidden History of Women as Healers 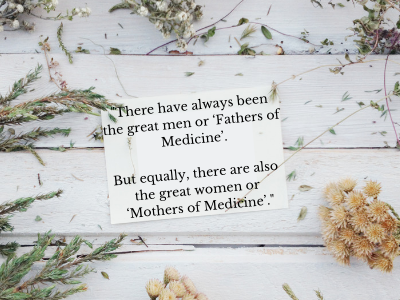 Throughout history, women have always been healers: they would grow medicinal herbs and pass on the secrets of their uses. Women were nurses, midwives and mentors who travelled from home to home and further afield. The history of women in medicine goes back to before ancient Egypt.  Priestesses of Isis were regarded as physician-healers who took their healing powers from the goddess Isis herself.  Egyptian records show that women studied at the royal medical school at Heliopolis in Cairo, Egypt as early as 1500 BCE.

Over time women were removed from the practice of medicine in Greece. By the 4th century, they were forbidden to practice.

A Greek woman called Agnodice was determined to change this. She disguised herself as a man and became a physician. She attended medical school, and began practising obstetrics and gynaecology, resulting in a popular following with female patients. However, her disguise was uncovered by the authorities and she was brought to trial for breaking the law.

This could have resulted in a death sentence, but the women of Athens united in protest. Not only was Agnodice acquitted, but the law was changed and women were once again permitted to practice medicine.

Women healers in Ancient Rome and beyond

History recorded very little about the women healers of ancient Rome until the Christian era began. The most famous early Roman healer was a woman named Fabiola, who lived in the 4th century. She was born into a wealthy family, but at the age of 20 dedicated her life to caring for the sick and poor. She was credited with being instrumental in the founding of the first public hospital in Europe.

The fall of the Roman Empire brought about the Dark Ages in Europe. During that time, the medical knowledge of healing was kept alive and performed in monasteries and convents.  A renowned woman of medicine named Hildegard of Bingen (or Saint Hildegard) was a German Benedictine abbess, writer, composer, philosopher, Christian mystic, polymath and visionary.

She is regarded as the founder of scientific natural history in Germany.

Into the light after the Dark Ages

As the Dark Ages ended, universities began to form. The University of Salerno in Italy was home to the most famous woman physician of medieval times: Trota of Salerno. Trota was on the faculty of the university and specialised in gynaecology and obstetrics.  A Latin text that gathered some of her therapies and treatments was incorporated into an ensemble of treatises on women’s health and childbirth that came to be known as the ‘Trotula’. It became synonymous with her name and used for hundreds of years.

In Europe during the late Middle Ages, religious doctrine made life difficult for women healers; most were midwives who treated patients with herbs. Because of their unique knowledge, they were often mistrusted as dark agents who practised the magic healing arts of witches.  An estimated 50,000 people (mainly women) came to tragic ends with the religious zealotry of the times, and were burned at the stake.

The birth of the Renaissance, and the decline of women practicing medicine

During the Renaissance, which began in the 16th and 17th centuries, modern science was born.  By the 1700s, medicine had become a respectable profession, and men began to take over the role of midwife. At first, women midwives and patients objected to the idea of male midwives. But by the 1800s, assisting at births had become an accepted job of male doctors.

The things women were allowed to do were reduced in many areas of western society as women became regarded as second-class citizens. According to common belief, education of any kind would be unnecessary and the study of medicine was inconceivable. Not until the women's movement began in the mid-1800s did things change and women began to practice medicine again.

Turning our attention to affairs over the ditch, a yet-to-be-famous and influential female icon of New Zealand landed there from France in 1860: Suzanne Aubert.

To Māori, she was known as Meri, a ‘wahine tino whakapono’, a very holy lady.  Pākehā [Māori-language term for New Zealanders of European descent] called her a succession of names – Sister Mary Joseph, Mother Mary Joseph, and Mother Mary Aubert – before they finally settled on Mother Aubert.

Suzanne Aubert’s healing ministry began in France where she worked as a nurse and studied botany, chemistry and medicine.  Her interests in this area developed further when she moved to New Zealand. Here she studied the native plant materials and herbal remedies while creating her own version of ‘rongoā’ [traditional Māori healing] with the help of local Māori.

She initially tendered to the Māori people and settlers and became known as the first ‘district nurse’. When she moved to, Hiruharama, or Jerusalem, 60km up the Whanganui River she became renowned for her healing services.  The native herbal remedies she created were the first to be notably used by the non-Māori community.

Exactly which native plants and in what proportions went into her medicines are unknown as her notebooks of recipes were either lost or destroyed.  As Māori rongoā does not follow closely prescribed recipes, Suzanne and her Māori teachers would have used their experience and their patients’ needs to make a herbal remedy with the appropriate mix of native plants.

In 1993, the Herbal Remedy (Rongoā) Analysis Project was initiated to analyse the medicines that remained.  The project, led by Dr Max Kennedy of Industrial Research Ltd, was unable to decode the recipes.

It did however successfully document Suzanne’s rongoā expertise and skills, and define and protect the 100-year old intellectual property. This led to the New Zealand Biotechnology Heritage Award in 1999. This distinguished award recognised Suzanne as:

There have always been the great men or ‘Fathers of Medicine’ such as Paracelsus, Hippocrates and Galen, to name just a few.

But equally, there are also the great women or ‘Mothers of Medicine’ such as the ones I’ve spoken about – and many more I haven’t.

The vast majority of healing lies in the commonplaces of everyday life with the women of our communities taking lead roles. We’re nurses, midwives, doctors, naturopaths, nutritionists, herbalists, homoeopaths, therapists, acupuncturists and householders. Long may it continue.